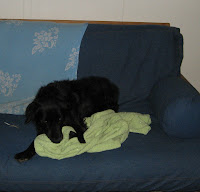 The animals received extra treats on Christmas day, the kitties had new fuzzy mice to play with, the goats had a special grain "casserole", and the dogs made out like bandits with squeaky toys and tennis balls. Tess goes wild for any ball, or anyone who says the word "ball" so it seemed strange to find her playing with a blanket. Well, there was a tennis ball in the blanket - so I thought, "Poor girl, your ball is caught, let me get that out for you." I pulled the ball out and threw it, went on about my day, and not 5 minutes later, Tess is back chewing on the blanket (with the ball in it). I pulled it out again and threw it, but watched her afterward. She was rolling the ball into the blanket, then working on getting it back out again. Who knew there were that many games to play with a tennis ball?

Posted by Golden Hearts Animal Sanctuary at 8:13 PM No comments: 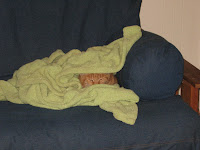 bring time to celebrate and share with friends and family. It wasn't a completely quiet time this year, as Waldo began feeling poorly. He ran a low fever and didn't want to eat on Christmas morning, so he spent the morning curled up in a blanket on the couch. He also started antibiotics and received some subcutaneous fluids and baby food too! A little extra TLC had him feeling better by later that night. 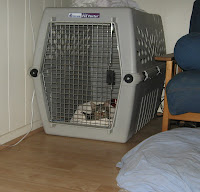 Scooter still continues to have intestinal trouble too. We're watching him even closer than before, making sure he stays "regular". He enjoys the extra attention, and he really enjoys sleeping in his crate at night. We only use crates here at feeding time or when introducing a new kitty, but Scooter grew up sleeping in one as a kitten. He's gravitated back to enjoying his own bed complete with water and litter box at night. He really enjoys snuggling down in the blanket until just his head is sticking out!

Posted by Golden Hearts Animal Sanctuary at 9:39 PM No comments: 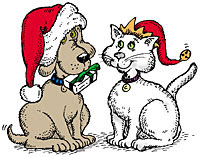 From our family to yours, we hope you have a wonderful Christmas!

Posted by Golden Hearts Animal Sanctuary at 7:35 AM No comments: 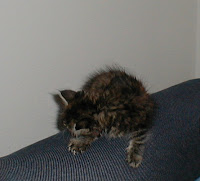 Sweet Lily quietly passed away today. It's still such a shock. She was a happy, apparently healthy kitty when we left for work this morning, playing with her toy mice. I found her this afternoon when I returned home for work ~ there was no struggle, no injury, it looks like she just lay down for a nap and didn't wake up. It's amazing how someone so young who's been with us such a short time leaves such an imprint on our hearts ~ we're really going to miss her...

Posted by Golden Hearts Animal Sanctuary at 9:04 PM No comments: 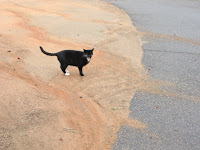 A bit camera shy, Sylvester is our semi-feral kitty, the only one who has the run of the property. I finally caught a photo of him, and as you can see, he's a handsome fellow, with beautiful white whiskers against his black fur. He started hanging around the property several years ago, making the mistake one day of investigating a storage room in the garage, which was my opportunity to nab him & neuter him! As you can imagine, when I released him, he left for quite some time.

When he returned and decided it was okay to stay around for mealtime, as I got closer to him, it was obvious he had an eye problem. He didn't seem painful with it, so with time and kitty tuna, we became friends & I was able to catch him for an exam. At some point in his adventures, he sustained a puncture to his eye, a nasty wound which caused the eye to shrivel up and scar over time. Ouch!

Blind in one eye, Sylvester spends his days pretty close to home now; his primary job is that of mouser, as we don't use rodent bait (or any pesticides) on the property. He also helps with watering plants and feeding the other animals too. As he gets older and slows down, he may even settle down enough to live with the Cabana kitties!

Posted by Golden Hearts Animal Sanctuary at 7:59 PM No comments: 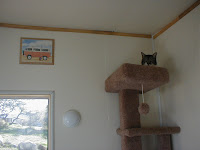 Has never had the best coordination, thanks to the neurological damage from early on in kittenhood. His love of heights and his lack of coordination collided 2 weeks ago, and resulted in a good wack to his head and spine. He's pictured above in a cat tree which is about 8 feet off the floor ~ we have since lowered all the cat trees to sit no more than 4 to 5 feet high to help lessen his chances of re-injury.

Medication is on the horizon for Hot Rod now as he's having petit mal seizures; he either stares off in space for long periods or decides to attack all other cats he lives with (even Rocky, who he grew up with). Phenobarbitol is the medication of choice, at a low dose to see how he responds. To his credit, he doesn't realize there's a problem at all, and it certainly hasn't slowed down his appetite!
Posted by Golden Hearts Animal Sanctuary at 8:28 PM No comments: 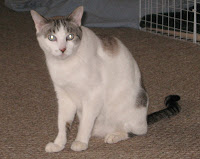 With new camera in hand, now I can post pictures regularly once again! These are the latest additions to the sanctuary, a couple of handsome blue-eyed guys. There are some "hazards" associated with my job as a veterinary technician, both good & bad. Poppy is the result of one of the good ones - he has the chance for a new life while I have the opportunity to help a really cool kitty. He suffers from IBD (irritable bowel disease) which flares with stress. The household he was in has kitties who liked to beat him up, and with multiple cats his family found it difficult to medicate or do diet trials to help ease his symptoms. Here, he is one big love bug who loves everyone including the dogs (and he kind of likes MeiLi too!) He's eating a boiled hamburger/potato diet now, plus taking supplements, antibiotics and steroids. He appears to be feeling much better! 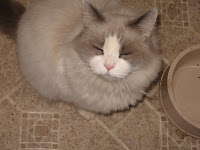 This is Austin, who also has beautiful blue eyes (trust me on this one, he closed them for every picture I took!) He has a very sad story with a happy ending, thanks to Hannah at New Beginnings for Animals in Orange County. His former owners relinquished him to the Orange County Animal Shelter after they found him injured as a result of being caught in the family car's fanbelt (yes, they threw this poor boy outside in their garage to live). He suffered from burns on his body which healed with lots of TLC from New Beginnings. They noticed that he drooled some too, so he went to the vet to address his dental care. His pre-anesthetic work-up found an enlarged heart. The diagnosis - hypertrophic cardiomyopathy, a disease in which areas of the heart muscle thicken and enlarge. It can be medically managed, but definitely reduces his chances of finding a forever home, so he came to spend his remaining days with us. He takes multiple medications including low-dose aspirin therapy to lower his chances for blood clots in the wrong places. He's living in the Cabana, where Leonard has made sure he feels welcome!

Posted by Golden Hearts Animal Sanctuary at 7:22 PM No comments: 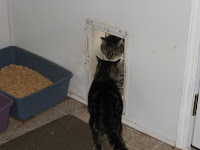 Here's where two hard-heads meet. Pepper wants outside, Rocky wants inside. This provided quite a stand-off for what seemed like an eternity, until Rocky finally abided by the "ladies first" rule. (What you can't see ~ the main door was open the entire time!)

Posted by Golden Hearts Animal Sanctuary at 6:58 PM No comments: 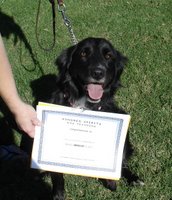 Here's a picture of Tess at her graduation from her obedience class. She's not only proud of her diploma, but she really liked the biscuit that came with it too! Now that class is over, she's still looking for things to do on weekends, so we've started agility training. 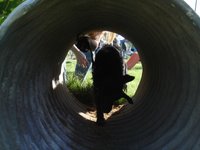 Here she is learning to go through a tunnel, which at first she thought was very scary...

And here she and I are navigating the weave poles. 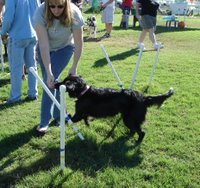 She goes pretty quickly even on 3 legs (much faster than me!)

Posted by Golden Hearts Animal Sanctuary at 3:11 PM No comments: