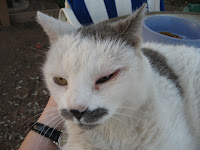 Leonard must have had a way to up-close meeting with a spider or bee today, hence the swollen eye! He wasn't very happy about my photographing it, or even medicating him for it for that matter. A quick call to our internist got the correct medication dosages for him ~ with his heart condition, we have to be careful! His cocktail of medication - a small dose of steroids, Benedryl, and Lasix to counteract any side effects of the steroid. By tonight, the swelling had gone down a little bit. He still may get an abscess, but we'll also start antibiotics just to be on the safe side.

Posted by Golden Hearts Animal Sanctuary at 7:53 PM No comments:

Poppy Has An Endoscopy... 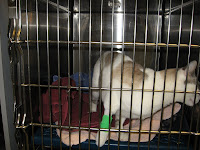 And feels incredibly sorry for himself afterward! He's been losing weight and having trouble with diarrhea and gas pains. The steroid injections and diet changes worked for a few months, but seemed to lose their effectiveness. He had an abdominal ultrasound a couple of weeks ago, which was pretty boring (that's good!) and had a fecal culture done too. With all tests negative and normal, endoscopy became the next step.

An endoscopy for cats (and dogs) is done the same as it is for people, under general anesthesia. A flexible endoscope is passed first down the esophagus, looking at the first part of the digestive tract; then, kitty is turned around and the scope goes the other direction! Biopsies are taken along the way in both directions. They've been sent out for a pathologist to read and we should have results by Wednesday.

Poppy hated not having breakfast, and he didn't find an enema much fun either. The pictures were taken after the procedure, when he was awake but probably seeing double, and definitely when he felt sorry for himself! He was a good patient, and spent much of the day hiding under the towels in his cage. I think he was worried we'd come up with other ideas for torture! 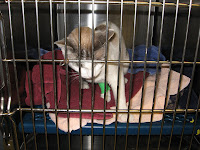 Posted by Golden Hearts Animal Sanctuary at 7:25 PM No comments: 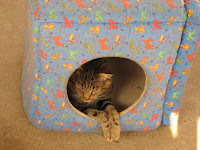 This morning. We have almost no wind this morning, and very little ash overnight, compared to previous nights. That makes it much easier to keep the water clear for horses, goats and geese ~ who wants to drink ash-flavored water?

The animals are returning to more of their regular routines; the air is still smokey but not as bad as it has been, so more kitties are spending some time outside again. The dogs are anxious to spend time outside too, since wonderful new smells have blown in!
Our local feed store is open today, as is our market, so if our evacuation orders are not lifted, at least we can pick-up the fly spray, grain and can cat food we need. As you can see above, Scooter's back to napping outside again!
Posted by Golden Hearts Animal Sanctuary at 10:46 AM No comments:

It's Quiet This Evening...

And we're very grateful! All is still calm on our end of town, and our fingers remain crossed that nothing decides to flare overnight. Here are some photos of our view. You'll notice the shade for the geese is blown down and trash and trash cans are well-scattered. Hopefully it will stay calm as the Santa Ana winds die down and we can start cleaning up a little!

Things are improving, but we're still under evacuation orders, so we can travel the roads, even leave to go into Escondido, but we can't get back home again. So here we sit, patiently, just a little longer, hoping we can restock cat food and horse grain soon!
Posted by Golden Hearts Animal Sanctuary at 8:46 PM No comments: 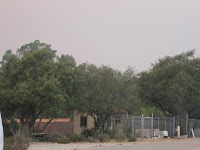 The new morning brings a new opportunity for firefighters to get a handle on all of the fires in San Diego. The fires closest to us are starting to merge, creating a huge fire line. Fortunately, it is still on the outskirts of town. Unfortunately, the quiet winds we had yesterday evening and overnight are now picking up speed again. Sounds like one of those "I've got good news & bad news" situations!
The animals are doing well. The cats have all been let back out into their play yards after I washed and watered them down. The goats and geese and horses are all doing well also. Our biggest chore is keeping clean water available because of the blowing dirt and ash. Inside, the dogs are napping after spending the night watching the latest "visitor" to the household - our neighbor's bunny, who's not quite sure what to make of the situation!
Posted by Golden Hearts Animal Sanctuary at 10:00 AM No comments: 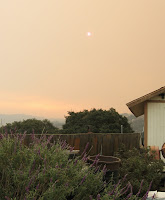 We are doing great this afternoon! The fire to our north is not in town at this point, and the winds have calmed, even stopping for the first time in 2 days. While we have a heavy blanket of smoke to deal with (less than 100 ft. visability), we still have our water & electricity & phone service, so who can complain??

The animals are doing pretty well through this situation. They of course picked up on our stress, but seem to understand the need to just play it cool for a while. The dogs are napping, disappointed they can't go investigate the new smells in the backyard. The cats are wondering why they're locked into their rooms, but aren't complaining too much! The goats & horses are enjoying munching on the leaves that blew into their yards, and the geese are surprisingly quiet! Those with asthma & heart conditions are taking it all in stride.
All is quiet and smokey for now. Roads are closed in to Valley Center, so if we leave, we can't get back in at this point, which won't be a problem until Thursday, when our can cat food supply will be running low. Thank you for all of your support!!

Posted by Golden Hearts Animal Sanctuary at 4:07 PM No comments:

We now have a fire on the Indian Reservations slightly to our north and east of us which has caused part of our town to evacuate as in the fires of 2003. Fingers crossed!

We will be here as long as is safely possible. We're fortunate because the power is still on at this point.

Since we still have phone & internet, we can keep updated on changing conditions. Also, we have found our Ham radio network to be invaluable. If you're not a "ham" it's not hard to do and a great way to communicate!
Posted by Golden Hearts Animal Sanctuary at 6:14 AM No comments:

Thank you for your prayers and blessings ~ for the time being, the sanctuary is safe. Winds around us changed to blow from the due east instead of the northeast. However, 4 new fires are being reported in our county, and 2 of them are in the northern portion of the county, where we're located. The link at http://www.sandiegocountyemergency.com/ is pretty up-to-date with fire information.
Steve & I are both at home (with freeways closed) and cat carriers are in every room. All kitties are confined in their rooms for ease of catching them quickly if needed. Our motorhome is loaded with all of the "people stuff" so we can concentrate on the animals should we need to evacuate.
Your offers of help are greatly appreciated & we will let you know if they are needed!
Posted by Golden Hearts Animal Sanctuary at 4:42 AM No comments: 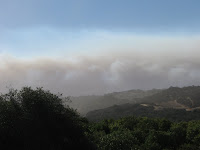 October often brings "Santa Ana" winds to us ~ dry, hot winds often 40mph or more. We expect it every year... but not this.

This is the view off our patio this Monday morning. There are 7 wildfires burning in San Diego county and they encompass the whole county. We were close to evacuating last night, as one of the fires was headed our way, but fortunately made a turn at the San Diego Wild Animal Park to head due east. There are so many starting so quickly, we may not be out of the woods for long.
Today, with wind gusts over 55 mph, our county's in deep trouble - those wonderful air tankers and helicopters can't fly. Uh oh. Now we're at the mercy of the winds. Keep your fingers crossed & say a prayer or two for us!
Posted by Golden Hearts Animal Sanctuary at 9:39 AM No comments:

Our Day in Rancho Bernardo! 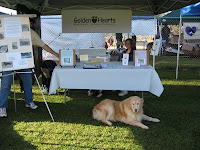 Sparky had a wonderful morning in Rancho Bernardo Park at the Dog Walk! He took the job as ambassador seriously as you can see! It was a very, very windy day as the Santa Ana winds picked up and carried many shade covers away. The picture on the top is our display about 8:15 this morning...
The picture below is our display by 9:30... as you can see, the winds really picked up! 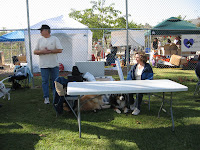 Posted by Golden Hearts Animal Sanctuary at 8:35 PM No comments:

Please Join Us On Sunday!

Sparky & I will be at our sanctuary's booth tomorrow, Sunday, at the Rancho Bernardo Park Dog Walk from 8am-noon. Grab a leash, your dog, and visit wonderful doggie vendor displays while supporting a great park. Please join us, Sparky would love extra pets on the head!
Posted by Golden Hearts Animal Sanctuary at 3:57 PM No comments:

The Girl Scouts Are Coming! 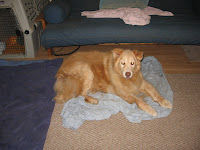 Girl Scout Troop 1230 in Carlsbad came out to meet the sanctuary animals today. They have asked to make the sanctuary their service project for this school year as they work toward their Bronze Award. Sparky held the title of "Official Sanctuary Ambassador" and greeted everyone with enthusiasm! While most kitties thought the whole thing too scary, Scooter and MeiLi made sure to say hello, and Roger was most appreciative of the carrots that appeared!

We are truly blessed to have a group of such compassionate individuals who are full of ideas & ways to help the animals befriend us! We look forward to working with a group of girls who can spread enthusiasm and compassion for animals of all ages and types as they go through life!
Posted by Golden Hearts Animal Sanctuary at 8:08 PM No comments: