A Close Call For Marci... 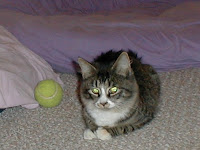 Marci gave us quite a scare last night. She's been doing very well living with Phoenix, Ballou & Waldo in the "House of Ballou", our newest kitty room & yard. Last night's feeding time found her reluctant to come in for dinner. Handling her caused her to pant.

Unsure of the reason behind her difficulty breathing, into the house she went, where she went into a crate with a fan blowing nearby, both to cool if needed & circulate air to make breathing a little easier. She also received a large dose of lactulose (stool softener) and subcutaneous fluids to make sure all systems were working well. A little Healing Touch for Animals and flower essences were used too.

It was a long night, but the dogs sat up with me to keep an eye on her, and around 1am, Marci decided she felt a little better and nibbled at some baby food. She also used her litter box - a good sign! This morning, she was no longer breathing hard, but was at the door of her crate demanding breakfast ~ yeah!

I'm not sure exactly what the cause of this "episode" was, but Marci's feeling back to normal now and wants to play. She'll be living at the house with Scooter & friends for a while until we make sure everything stays cool!


Posted by Golden Hearts Animal Sanctuary at 8:44 PM No comments: 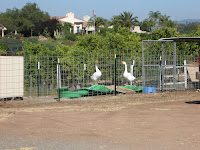 Get their own yard! These two guys were "hired" to provide protection for the goats and warn of predators. Unfortunately, one of their favorite hobbies is herding the goats. Fun for them, but goaties really didn't find it entertaining; this often meant confining them just to give the goats a break. So, we made the decision to move them beside the goats, giving them their own space, but still leaving them in a prime guard goose location.

They have a 6'x10' shaded "goose" run for cleaning time confinement & afternoon shade, 2 large pools for swimming (and yes, they will often share the same one), a "goose house" for shelter, and a 12'x32' yard to play in.

Now the geese can patrol and the goaties can nap in peace!

Posted by Golden Hearts Animal Sanctuary at 8:06 PM No comments:

Melody vs. the Purple Bucket 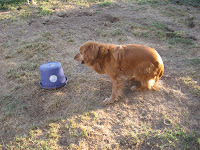 Melody thought that wrestling the purple bucket this afternoon may lead to dinner being served quicker. It backfired, since I had to grab the camera and take pictures!
Posted by Golden Hearts Animal Sanctuary at 9:02 PM No comments:

The House of Ballou 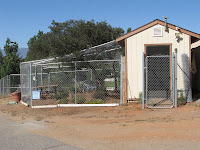 Finally, here are some pictures of the "House of Ballou" ~ named of course, for our beautiful Ballou, who really wanted a yard to play in. It's been about 3 weeks now, and he, Phoenix, Marci and Waldo are having a great time! The landscape is a little bleak right now since it's so warm, but they have oak trees for shade and a picnic table with benches too. 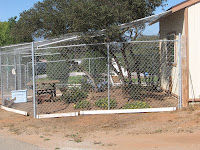 I didn't get any pictures of the inside yet, but what other color would you paint it but blue? Because this foursome is able-bodied, we installed ramps inside so they can sit above the window or sleep in the upstairs "bunk". Feeding time involves Ballou eating outside, Waldo inside with the 2 girls inside in crates so they each eat only one meal.

Their yard runs alongside the horse pasture, so our horses can grudgingly watch the cats get fed first!

Posted by Golden Hearts Animal Sanctuary at 9:18 PM No comments: 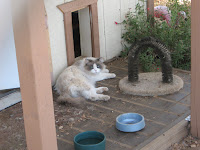 Is getting bigger. Oh Austin! I went out to feed the Cabana kitties this morning, and began to count heads, and came up one short. Uh oh. The search was on to find Austin, who was "missing in action" from the breakfast brigade. I found him, laying in the yard, in the sprinklers. Uh oh...

After a hurried serving of breakfast, a quick search for the "big carrier" (he's no tiny boy) he was off with me to work. This is when my profession comes in handy, as does the generosity of the veterinarians I work with. Dr. Slusser, our Internist & Dr. Farrell his associate, both looked at Austin. We did some bloodwork and a urinalysis, which all looked pretty good.

Nothing explained his sudden change. Until we did an ultrasound of his heart. We know that Austin has hypertrophic cardiomyopathy (HCM) which is why he's with us. In the back of my mind is the fact that someday, he will be in heart failure as a natural progression of his disease. I did not ever guess it would be so soon. While most of his heart hadn't changed much from the ultrasound of October 2006, his left atrium is now huge. He's on the "brink" of left-sided heart failure.

He now has a new medication regime - one that I'm sure many human heart patients can appreciate. He is taking Enalapril (an ACE inhibitor) twice a day, Diltiazem (a calcium channel blocker) once a day, a small amount of baby aspirin twice a week (to prevent blood clots), and now Lasix (a diuretic) every other day. He'll also be on Clavamox, an antibiotic, for a week just to cover all bases.

I haven't broken the news to him yet, but he also now will need monthly bloodwork for a while to monitor his kidney values, thanks to the addition of Lasix. I'll post updates on the blog as we go along and let you know how he does ~ for now, tonight, after a dose of Lasix, he feels good enough to have dinner and cruise the yard. Whew!

Posted by Golden Hearts Animal Sanctuary at 9:39 PM No comments: 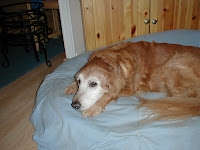 Want to thank everyone they met for the love and pets they received at the San Diego County Fair today! We had an overwhelming crowd of people of all ages who met myself, Sandra our Treasurer, Luna, Scooter and Jake (Sandra's Aussie). 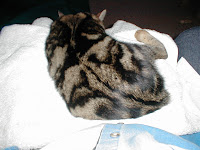 It was a wonderful opportunity to educate the public about the joys of older and disabled pets and tips for living with them. What a wonderful day!

Posted by Golden Hearts Animal Sanctuary at 10:27 PM No comments:

Watch For Us At The Fair!

Saturday, June 16, please join us at the San Diego County Fair. Scooter and Luna will be graciously accepting hugs and pets, and we will be distributing information about the sanctuary and about caring for senior pets.

We will be in the Wyland building all day ~ we look forward to seeing you there!
Posted by Golden Hearts Animal Sanctuary at 10:47 PM No comments: 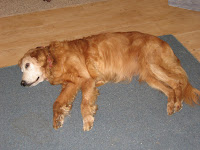 Luna has been slowly dropping a little weight again, so we checked her labwork to make sure her thyroid level's holding. Well she surprised us with a major change in her kidney values. She's headed toward kidney failure, with elevated BUN and Creatinine levels. She's also anemic, which goes hand-in-hand with kidney disease.

So Dr. Laflin, our holistic veterinarian, and Dr. Booman, our general practitioner, have developed at treatment plan for her. She will start receiving subcutaneous fluids twice a week, a B vitamin/iron supplement, and Chinese herbs to support her kidneys. Her bloodwork will be monitored closely for changes too.

This certainly won't slow down her public appearances this summer ~ she won't turn away from the opportunity for treats and pets!

Posted by Golden Hearts Animal Sanctuary at 10:28 PM No comments: