Poor Waldo, trouble just seems to seek him out! He's been doing pretty well, enjoying life with Marci, Phoenix & Ballou, but the incredibly hot Labor Day weekend brought another life-threatening health issue to light - Waldo has feline asthma. With a dose of Prednisolone, he felt much better; he's been on a reducing schedule of pred. ever since. He's been drug-free for about a week now, and once again the weather changed on him.

The rainstorm making its way through San Diego county today brought enough wind to once again irritate his lungs ~ so back on Pred. he goes, for now. He's in good company, the rain has brought forth the aches and pains of arthritis for Melody, Sparky, Leonard, Pepper and Violet the goat. In typical So. Cal. style, the rain will soon give way to clear skies and much happier critters!

Posted by Golden Hearts Animal Sanctuary at 10:16 PM No comments: 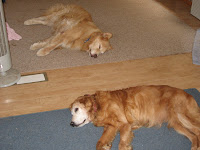 Last night. What a wonderful friend she's been! She helped me care for many who have come through the doors over the last few years. She was my constant shadow from the time she arrived until her last few days when she could no longer get around.

Renal failure is much, much more difficult to manage in dogs than cats. Large volumes of subcutaneous fluids, phosphate binders, and other appropriate medications are used to keep kidneys working as long as possible. In Luna's case, she rallied for about 6 weeks after severe renal failure was diagnosed; then her blood values began to slowly creep up higher and higher and wouldn't decrease again.

Most dogs never leave the hospital, but Luna was able to initially stay on IV fluids with me at work during the day, then stay on fluids at night at home. She didn't have to be hospitalized at all. We then combined subcutaneous fluids, phosphate binders, BUN/creatinine binders, Pepcid, anti-nausea and ulcer medications with acupuncture & Chinese herbs.

As Sanctuary Ambassador, she leaves behind large shoes to fill. As my shadow, there's now an empty spot at my feet as I sit and watch TV in the evening.

Rest in peace, beautiful spirit, we will miss you!

Posted by Golden Hearts Animal Sanctuary at 8:53 PM No comments: 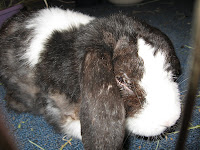 If you're an 8 year old bunny with medical problems, where do you go to find sanctuary? Here, of course! Mister came to live with us. He has some chronic eye trouble, and is growing some extra lumps with age. His teeth need to be trimmed as many bunnies need to, and he has also lost some weight with his health issues.

He has a wonderful personality and loves to be held and adored! We're introducing him to alfalfa/molasses, which is finely chopped alfalfa covered in molasses which is easy on his teeth. He's also enjoying dried papaya bits, green leaf lettuce, and banana as we introduce healthier bunny foods to him.

Roger Rabbit knows there's a new guy around, but he's okay with it. After all, new treats have appeared too!
Posted by Golden Hearts Animal Sanctuary at 9:02 PM No comments:

Siamese In A Basket 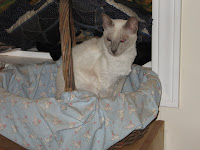 MeiLi found Scooter's travel basket today, and has claimed it as hers! It sits near the air conditioner, so she has one of the coolest spots in the house. As the daytime temperatures are well over 100 degrees this weekend, I think there may be some arguments over who gets this prime napping spot!

Posted by Golden Hearts Animal Sanctuary at 7:42 PM No comments: