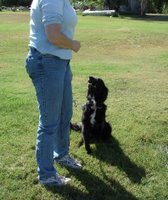 Tess & I started Basic Obedience class today with our favorite trainer Liz Palika of Kindred Spirits Dog Training. Tess was a little unsure of the car ride at first (after all, she did go by herself) but then became very excited when she saw dogs of all shapes and sizes ready to play - at least that's what she thought!

Today was an introductory day, so most of our time was spent sitting and listening (or trying to in a class of 25 excited dogs or so!) We then worked on the "sit" command and did some more talking afterward. Obedience in a group class is an important step in the overall socializing and training process for Tess as she works toward her career as sanctuary ambassador. This last picture is a tired Tess on her way home, where she took an even longer nap! 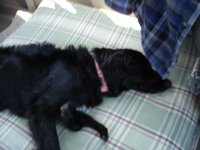 Posted by Golden Hearts Animal Sanctuary at 7:53 PM No comments:

Sleeping ~ at least for the next couple of days. Waldo went to TriCity Veterinary Clinic yesterday and had a dental. Not just a simple clean and polish, Waldo had all of his teeth removed (yes, every last one!) to effect a cure of his dental troubles. Waldo has all of the symptoms of Lymphocytic-Plasmacytic Gingivitis Stomatitis, in which the body becomes allergic to the plaque around the teeth. You can find more information (and pictures) of it here. Waldo has a very severe case of it - his gums were swollen and his mouth not only had ulcers in the back of it, but on his tongue, causing difficulty eating and swallowing. There was a very poor prognosis when 3 weeks after a steroid injection and antibiotics, all symptoms returned worse than before. 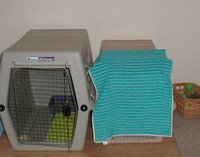 Waldo's spending the next few days with some really good pain medication, a quiet carrier to sleep in, and all of the baby food he'll let me feed him by syringe. He will be on antibiotics for several weeks until his gums are healed too. This picture shows the "recovery ward" with Waldo sleeping behind the towel-covered door. The empty crate next to him is Scooter's dining hall, and dog toy basket is on the other side.

Posted by Golden Hearts Animal Sanctuary at 4:59 PM No comments: 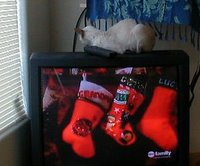 MeiLi has found a new location to spend the day - it's clean, free of dogs, and gives her a great perspective on what's going on in the house. The TV! Though I'm not sure why she's watching a Christmas movie (it's way to early to think about that!) she spent most of her morning sleeping up there. I'm hoping she doesn't fall off - that would be a rude awakening! Her favorite part of her new location - she's right by the front door, so she's almost at eye level with anyone walking in. It's quite a surprise the first time she meows at you!
Posted by Golden Hearts Animal Sanctuary at 4:29 PM No comments:

Friends Come In All Sizes 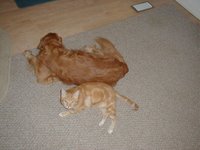 It took some time, but Waldo's finally come to accept there are dogs in his life now. He's even taken to snuggling up with them at naptime too. Here he is with Luna while he waits for breakfast - she doesn't mind, she makes sure that all the canned food is completely cleaned up!
Waldo went to TriCity Veterinary Clinic yesterday to see Dr. Porte. We talked about the best way to deal with his ouchy mouth problems. On Tuesday, Waldo will go in to have his teeth pulled and the growth in his mouth will be evaluated and biopsied. Mouth problems such as his are often remedied by pulling all the teeth, as the body "attacks" them. Aside from "gumming" his food afterward, he should do just fine, without the constant need for steroids. Dr. Porte will also be able to get a close-up look at everything going on in Waldo's mouth without poor Waldo being awake for it!
Posted by Golden Hearts Animal Sanctuary at 4:23 PM No comments: