We wish you and your family the best during this Thanksgiving!

Posted by Golden Hearts Animal Sanctuary at 10:21 AM No comments:

A Pile of Goldens! 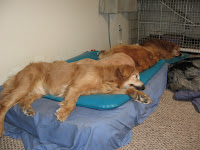 Liberty and Pilot and Melody are sharing the same bed ~ the orthopedic mattress with a canine cooler bed on top is the most sought-after space in the house! It's been quite a while since there's been an update on our blog, so here goes:

Pilot is healing great. He has lost weight, and sports an 88lb figure. He's working on muscle-building and range-of-motion in his rehab program.

Melody has had an evaluation by our favorite neurologist Dr. Stevenson. Melody has had some changes in her behavior patterns that are concerning. Knowing that she is already epileptic, there is a worry that something is changing in her brain. We'll keep you updated on what the tests show.

And, let's not forget the cats~

Scooter has had four rectal prolapses in the last 3 weeks. Once again, we're trying to find the right balance of medications to keep this at bay. It's probably due to grooming and too much hair ingestion, so it will hopefully end soon!

MeiLi had a severe episode of respiratory trouble. She became so stuffed up that she actually went into respiratory arrest early one morning ~ and yes, you can rescue breathe for a kitty! Like a newborn animal who needs stimulation to breathe, I gently hung her upside down and swung her (not as violent as it sounds, trust me!) to let gravity help drain her out. She's doing better now, and is recovering from an insect bite on her head!

Poppy is continuing to decline in spite of our best efforts. He is not only battling IBD, but is also dealing with a secondary pancreatitis. Cats don't often do as well as dogs with pancreatitis. Please send healing thoughts his way.

It's been more like living on an "ER" or "MASH" episode over the last couple of months!

Posted by Golden Hearts Animal Sanctuary at 9:49 AM No comments: