A Snotty Nose, A Tortoise & A Disagreement

What do these all have in common? They've all happened in the past 10 days!

The Snotty Nose - MeiLi's herpes virus has reared its ugly head again. Poor kitty has been on antibiotics, subcutaneous fluids, antihistamines, lysine, and a regular force-feeding schedule to get her feeling better. Cats tend not to eat when they can't smell their food, and that's certainly the case here. I'll update the blog and let you know how she's feeling, for now, she's pretty unhappy when she sees me, aka the "pill-popping, fluid running, force-feeding" person in her life!

The Tortoise - yes, you guessed it, a tortoise has come to live with us! He (I think) is an African Spurred Tortoise and about 5 lbs. He was found cruising our veterinarian's property. We're trying hard to locate his family, with no luck so far. He's a very well-socialized little guy, who is welcome to stay if his family can't be located.

The Disagreement - the tortoise has definitely sparked interest in all of the dogs, old and young, unfortunately so much so that Maverick decided to make him his own and go after anyone found getting too close. So old, slow-poke Sparky was the first to learn of the new "rules"; fortunately Maverick doesn't know how to "fight" well and Sparky has a lot of hair. Sparky received a couple of puncture wounds & Maverick received a "time out"; he now understands the tortoise is not a new toy just for him!

I'm happy to report Scooter's doing well, and his suture removal is planned for this weekend, when I can keep a close eye on him. Marci is doing great too ~ she's now back out with Ballou and friends. Speaking of Ballou, we celebrated his one year birthday with us on Saturday. He got a special canned food treat which he happily shared with his roommates! We're hangin' in there, hoping everything returns to normal and all are feeling better soon!
Posted by Golden Hearts Animal Sanctuary at 10:18 PM No comments: 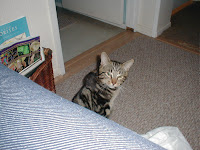 For Scooter (& me!). Scooter suffered yet another rectal prolapse tonight. When I knew that I couldn't reduce it alone, I asked our general practitioner Dr. Booman for help. She "put everything back" and then placed a pursestring suture, designed to close up an opening. This was truly the worst episode he's had, and it required a light anesthetic so he was "loopy" enough for us to put everything back in place. A light anesthetic kept Scooter from pushing against us (and his colon) & he's recovering well tonight as I write this.

For Scooter, the pursestring's purpose is to help keep his colon on the inside while all swelling subsides and the motility in his gut returns to normal (for him!). And once again we try to figure out what diet & medication combo will prevent future episodes. (Sigh) It's been a tough road for this little guy!
Posted by Golden Hearts Animal Sanctuary at 11:40 PM No comments: