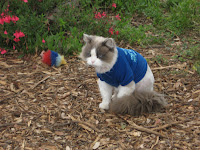 After his long battle with hypertrophic cardiomyopathy. One of the potential problems that is always lurking in the background is the chance that he could pass a clot, or thrombus, that would impede circulation somewhere in his body. And sadly, Austin passed a clot, a "saddle thrombus", which cuts down the circulation to the hind limbs. With hospitalization, pain medication, and heparin to thin the blood, sometimes the situation can improve.

We made the hard decision to let him go, knowing that he wouldn't do well in a hospital, in fact he didn't really like being medicated twice a day. And spending two weeks minimum waiting to see if he'd improve just didn't seem fair for a kitty used to spending his days roaming a large grassy yard.

He passed peacefully in my arms, and his "groupies" Rocky and Hot Rod had the chance to say goodbye too. Even Pepper paid her respects.

Rest in peace sweet prince, you will be deeply missed...

Posted by Golden Hearts Animal Sanctuary at 2:09 PM No comments: 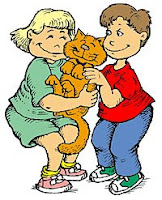 To the Escondido 4H Club Zoology Project members who visited the animals today! They brought blankets, biscuits, canned dog food. The best part for the animals ~ they also brought hands for petting, and laps to sit in! We hope they enjoyed their visit, as the animals had a great time!
Posted by Golden Hearts Animal Sanctuary at 6:31 PM No comments: 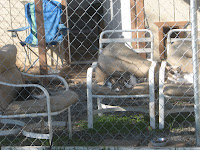 Of the feline variety! All of the animals have been enjoying the unseasonably warm weather we've been having lately. Here, Rocky, Hot Rod, and Austin are all enjoying a post-breakfast snooze. It's hard work, after all, there's a noon-time nap headed their way too!

Posted by Golden Hearts Animal Sanctuary at 6:27 PM No comments: 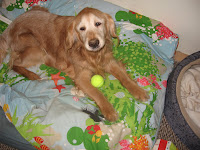 Liberty has had trouble with opening her mouth wide enough to do things that most retrievers enjoy ~ like playing with balls. It's as a result of scar tissue in her temporomandibular joints (tmj). Today, she managed to actually get a tennis ball in her mouth, and although you wouldn't know by the picture, she carried it around most of the afternoon! It was a tight fit, and she looked a little relieved when she finally put it down.
Libby won't ever have normal jaw function, but at least for a little while, she got to have "golden fun!"

Posted by Golden Hearts Animal Sanctuary at 6:12 PM No comments: 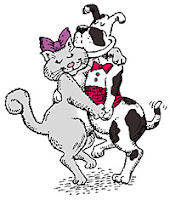 Here's wishing you and your family a wonderful New Year!
May your 'Golden Hearts' shine in 2009!
Posted by Golden Hearts Animal Sanctuary at 8:53 AM No comments: