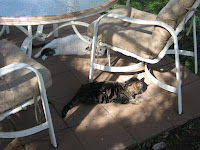 Leonard and Pepper decided to spend some time working on their tans, sprawled out in the little bit of sunshine they could find today. Everyone else could be found napping inside. These two are the most senior of our seniors, so afternoon sun opportunities are especially important to them!

Posted by Golden Hearts Animal Sanctuary at 7:41 PM No comments:

While his new chemo drug Cytoxan had made him tired, and cause a little diarrhea, Sparky continued to eat and get around pretty well. He was enjoying new-found foods in his diet - home-cooked chicken and rice, baby food, Gerber meat sticks, and sugar cookies! He slept in his old favorite sleeping spot last night, barking once for me to get up and change his bed when he had peed. This morning, he had a 105 fever and could barely walk. Off to work he went with me. He shuffled into the hospital, barely making in the door, and as we were drawing blood and placing an IV catheter, he quietly passed away.

Sparky was with us only a little over a year, but what an amazing year we had together! I'll miss his daily companionship during chore-time and his wonderful warm personality as he greeted visitors. We will all miss his eyes, the windows to his soul and spirit, that after some time and lots of love, began to shine again.... That sweet blonde teddy bear of a dog touched all of our hearts and taught us all about learning to love again....

Rest in peace sweet spirit, you will be missed!

Posted by Golden Hearts Animal Sanctuary at 12:57 PM No comments:

Today he began an oral chemotherapy drug called Cytoxan, given once daily for 4 days. He has a high white blood cell count, so we've added in antibiotics to help fight infection. He had fluid tapped from his chest today, so he's breathing easier. Ultrasound showed that the tumor has reduced in size, and the fluid in his chest is looking better, so this is all very encouraging news.
His energy level is down a little, but he's still getting around to help feed the animals. He continues his Chinese herb regime along with his traditional medications. We'll keep the blog updated!
Posted by Golden Hearts Animal Sanctuary at 8:46 PM No comments: 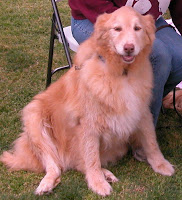 Sparky's knee is healing pretty well ~ he can put some weight on it and even walk a few steps on a level surface. The fluid cytology came back and confirmed that it is indeed chyle, which is caused by leakage from the thoracic duct or one of the lymph vessels that drain to it. The most common causes are a tumor, a trauma, heartworm disease, or right-sided heart failure.

We know he has a mass - the most common mediastinal (middle of the chest) tumors are either a lymphoma or a thymoma. One can be reduced and managed with chemotherapy while the other one can't; surgery is just not an option for this sweet ol' guy either. So, after quite a bit of discussion with our internist Dr. Slusser, and our holistic veterinarian Dr. Laflin, we've opted to try chemotherapy. If the tumor is due to lymphoma, it should respond to the chemo by reducing in size, which will keep the fluid from building back up in his chest. If it's not, well, we'll cross that bridge when we need to.

Sparky received a dose of vincristine today, a small intervenous injection, and also had his chest tapped again. Today, we removed 1400mls from it, and he was feeling much better afterward! He has a recheck in a week, and we'll evaluate how well it worked.

Posted by Golden Hearts Animal Sanctuary at 8:53 PM No comments: 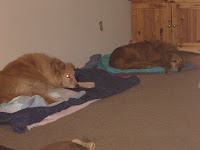 Melody decided to spend some quality nap time with Sparky today. He's been pretty bummed out since he can't do his normal daily routine - at least until his knee heals. Just outside the picture on the couches are Quincy and Holly, making it a full living room of blondes!

Posted by Golden Hearts Animal Sanctuary at 8:45 PM No comments: 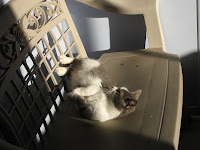 A former Kentucky boy, Hank was very surprised to hear that there is sun in San Diego, and today he spent as much time as he could following the sunbeams around. Here he is rolling around on the bench in the kitty room. It's a wonderful day to be a kitten!

Posted by Golden Hearts Animal Sanctuary at 7:19 PM No comments: 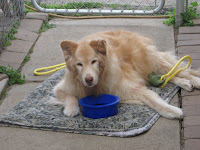 While Sparky's front leg is healing well, and his knee is healing slowly, we had another blow to his health yesterday ~ he had a little cough as he walked in to work with me, and an x-ray revealed fluid in his lungs. Uh oh. Then an ultrasound of his heart found the cause ~ a tumor in his chest. Big uh oh.

We did a procedure called a thoracocentesis, in which a needle is inserted into the chest cavity and fluid is drained off. After 850 ml's were drained off (a little over a quart) he was feeling much better. And he sat through all the work-up and procedures like a perfect gentleman! An analysis of the fluid we drained from his chest is pending, as it may reveal what type of tumor this is.
Today he saw our holistic veterinarian Dr. Laflin, both to work on his orthopedic issues and deal with his newly diagnosed cancer. He received a chiropractic treatment and energy work, and will be starting some Chinese herbs and nutraceuticals and vitamins to help support his body. Healing Touch, Reiki and a fresh, whole food diet are also in store for him. In the picture above, he's outside in his favorite spot, on a blanket, where he can watch everything going on. The yellow rope handles belong to the sling that I use to assist him as he walks ~ 80lbs is a lot of dog to lift! I'll post updates on the blog, and hope that you will keep him in your thoughts!
Posted by Golden Hearts Animal Sanctuary at 8:48 PM No comments: 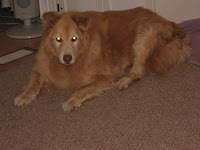 Poor Sparky! As arthritic as he is, it doesn't take much to cause him trouble. Whether he tried to get up wrong, or too fast, or another dog ran into him we'll never know for sure, but what we do know ~ Sparky has torn a ligament in one of his knees. In addition, the "wrist" of the opposite front leg has been strained too. The result is an 80lb dog with two gimp legs.

Not a super great way to start out the new year.

Sparky saw our orthopedic surgeon Dr. Lenehan on Thursday. We took some x-rays and were relieved to see that the injury to his front leg is just that, and not the beginning of a bone tumor - he's just the right age for that to happen. We are weaning him off the Prednisone that he's been taking for his arthritis in the hopes of starting an NSAID such as Previcox or Metacam which he can use long term without the steroid side effects (he's been drinking like crazy - not fun if you can't easily get up to pee!) Our fingers are crossed that his knee will scar down and heal, but that takes 8 weeks to know for sure. All other issues considered, surgery is not our first choice, as his recovery would be very difficult.

Sparky will be seeing Dr. Laflin, our holistic veterinarian, this coming week, for supportive care - acupuncture and Chinese herbs. In the meantime, he's getting the best maid service one could hope for and he's taken up residence in the living room where he can immediately order room service!

Posted by Golden Hearts Animal Sanctuary at 9:05 PM No comments: