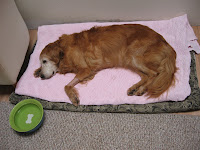 I've been slow to post anything on the blog lately because Luna requires some pretty intensive nursing care. She's been having trouble getting around, so we've been waiting anxiously for her next chiropractic visit, but she also developed a cough, so she went for x-rays. Fortunately, nothing showed on x-ray in her chest, but she was placed on antibiotics for 10 days as a "just in case" measure.

A week ago Monday, she had some blood work done, since it had been last checked in May, and she had some kidney disease at that point. It was quite a shock to see that she is now in renal failure, with very high numbers. She spent last week on IV fluids, coming home on fluids at night, and on them during the day with me at work. Rechecking her blood values after 4 days of diuresis, they really hadn't changed much. Not a good sign for the long haul.

She's now on subcutaneous fluids, plus Chinese herbs, plus Pepcid & Carafate & Slippery Elm (for her GI system), Epakitin and Azodyl. She's also on the "whatever you want to eat" diet, since her appetite has decreased. We rechecked her blood work yesterday and it has indeed improved. The 3 primary blood chemistry values looked at in kidney problems, BUN, creatinine, and phosphorus, have all come down.

I'll update the blog as I can with her progress ~ our current battle is the anemia secondary to the kidney issues. It's hit her pretty hard, so she spends most of the day sleeping. While she's enjoying her newly discovered "maid service" the other dogs are most disappointed it only applies to her!