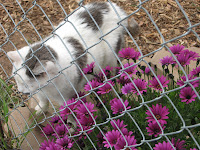 Leonard is doing very well in his "golden years" but he needed his annual check-up anyway. He had a physical exam and a cardiac ultrasound with our internist Dr. Slusser at Animal Internal Medicine this past week.

He has hypertrophic cardiomyopathy, a condition in which the walls of his heart are enlarged, so its not performing optimally for him. He takes a medication called Atenolol, which is a beta blocker used for humans. We're very happy that his heart is stable!

He has lost a pound in body weight over the last 18 months, which isn't surprising given that he's about 18 years old! He also had a little labwork done too, and his BUN and Creatinine are elevated which are signs of renal failure. It's normally managed with supportive care, generally with subcutaneous fluid therapy, sometimes a diet change, and nutriceuticals such as Azodyl and Epakitin. With Leonard's heart disease, the fluid therapy is out ~ we could put him in heart failure very quickly. So we've opted to use Azodyl, a twice daily capsule which binds to the toxins the kidneys can't filter out properly. We will also continue a good quality diet, and add in Epakitin when his blood phosphorus levels rise.

Leonard doesn't know there's anything wrong with his kidneys or his heart. He's not very fond of his new twice daily medication regime, but takes it in stride and is still purring when we're done!

Posted by Golden Hearts Animal Sanctuary at 10:58 AM