He Has A Guardian Angel... 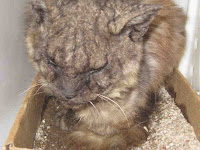 When I heard the phone message asking for help for this little guy, I said "yes" sight unseen. Labeled "feral" and with a mange-type skin condition, he really didn't stand a chance in the county shelter just before the July 4 weekend. And he wouldn't let anyone handle him either, a huge strike against his chance at a home.

This tough-guy feral cat is really just a sweet old tom cat who can't see because his eyelids are swollen due to the bad skin. He growls and hisses when he hears anything resembling a cage door opening (like his new crate "home" with us) but a few soft words have him quietly waiting for someone to hold him. It looks like he does have mange, which the shelter started to treat and we will continue. His eyes look a little less ouchy today after some antibiotic eye ointment treatments which he easily took to here. He's eating well and enjoys lap time and petting, he even has a pretty good purr motor!
It will take some time to heal all of the wounds from what this guy has gone through. He already looks like a changed cat from the photo you see above (his shelter photo). I hope to post some pictures of him in the next couple of days. I don't know what his name will be, but for now I've been calling him "Leo the Lionhearted" because it's a brave kitty that went through everything he did. Thank you Renee and all of you shelter angels, who work so hard on behalf of the animals ~ "Leo" and those like him wouldn't be here without you!
Posted by Golden Hearts Animal Sanctuary at 7:19 PM

He looks gorgeous now! He will be unbearable when all is said and done. We had two little girls(kittens) turned in to us that appeared to have mange. Treatment didn't change things for them but a food change did. They went from hairless little golems to beauty queens after we cut out the foods with grains.
I hope Leo feels better already. I can't imagine what it must feel like to have mites all over you. Good luck and swift recovery to Lionheart. Thank you so much for taking in this "feral" kitty!!!