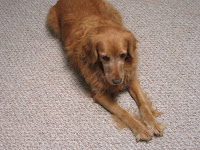 Melody had her turn at a veterinary work-up recently too. As I was brushing her teeth, I discovered a good-sized mass, about the size of a marble, along her gumline. Most lumps that grow in the mouth are bad news, so we acted quickly. She was into the office with me just a day later.

We sedated her and biopsied the lump, as its base was too large to just lop off and expect it not to bleed much. It was a quick procedure, most of the time was spent with direct pressure on the site to stop the bleeding.

Melody was pampered with canned food for a few days, the down side was ~ no nylabones with such a fresh wound in her mouth! The results are great ~ the lump is epulus,a benign overgrowth of gum tissue. A good explanation of oral cancer and benign lumps can be found here. In her case, it's probably because she spends so much time chewing on rope toys and nylabones. Lucky girl, she never really realized how worried we were!